Young and rebellious, Ruth Squire defied her parents to live the high life of young people in 1929 Detroit. Handsome and responsible, Peter Kirby worked diligently to make his family's life easier. Rich and powerful, Eric Horton held the fates of many families in his hands.

These three lives intertwine through the differing worlds of high society, middle-class life, and organized crime, culminating in an engagement, a kidnapping, a misunderstanding ...

"I thoroughly enjoyed this page-turner. Unable to put it down, I finished it in a couple of days. I highly recommend it for all who enjoy historical romance, mystery and suspense."

"Eloquently written, terribly romantic, with about as many twists as one might expect in a great mystery novel, "An Unlikely Arrangement" grabbed me from the beginning and did not let go."

"Attention-grabbing and relevant to its era, this narrative contains a combination of mystery, homicide, disloyalty, conspiracy, greediness and on the positive side love and courage I. found this book wonderful and hard to put down."

"I am usually not a romance reader! But, this is a love story that is full of intrigue and suspense! I blazed through this book in two days and am ready to read the 2nd in the series. Can't wait to find out what will happen ...." 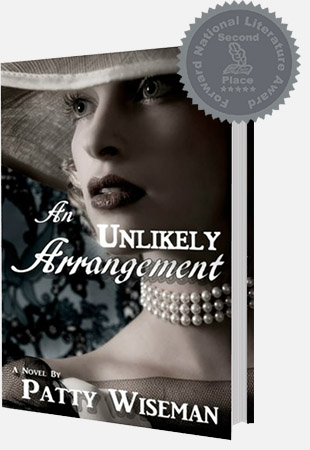 The voices continued … muffled, no matter how hard her ear pressed against the thick, wooden door. Did they say Kirby? Who is Mr. Kirby? The crisp, winter wind shook the windowpanes, but the gooseflesh rippling on her young flesh was not a result of the cold. She pushed hard, away from the oak barrier. “You can’t do this to me, Mother. I am seventeen, a grown woman. Let me out.” Ruth Squire rattled the lock while her other fist pounded the heavy door. “Do you hear me?”

No answer; she didn’t expect one. She was familiar with discipline, plenty of it, the consequence of a strong will and zeal for adventure, but never like this, locked inside the second-story bedroom. Ruth’s hands fell to her side. Crazy from confinement, she paced, a lioness caught in a cage.

“What is she going to do to me this time? Even Father won’t talk to me.” The metal springs of the bed squawked in protest at her weight. Sprawled across the rumpled bedcover she stared at the only link to the outside world. The flicker of the gas street lamp outside the warbled glass window did nothing to soothe her.

Although…No, not the window, that is how I got in trouble in the first place.

Alone against the world, everyone gone—her best friend Ginny, Father, and worse, she had made an enemy of Mother. Instead of rage and exasperation, her     mother     remained     calm, determined—even sinister. “This side of her is something to fear, I believe.”

The growl in her stomach intensified, and thirst ravaged her throat. What time is it? Do they intend to keep me in here until morning with no food or drink? A key rattled in the lock, and she jumped up as the door swung open.

Priscilla and Robert Squire entered bearing a white linen-covered tray. “You will eat now, Ruth. We’ll talk after you have finished.”

“I’m not hungry, take it away.” Ruth’s stomach lurched at the look on her father’s face. His sad blue eyes showed no sign of the familiar, easy smile of assurance. Although he stood taller, he wilted beside his wife, a shadow of a man. One hand smoothed his peppered hair; the other jingled the change in his pocket.

The tray hit the nightstand with a bang. “There is no room for argument. I said eat.” Mrs. Squire crossed her arms against an ample bosom.

Ruth looked to her father for help, but he only sighed, and took a seat in the chair across from her.

The warm aroma of cook’s scones broke down any defiance, and her fists unclenched, although she continued to glare at both parents. She eased onto the side of the bed, hesitant, eyes on the enemy, and devoured the light, flaky scones, and warm tea in short order. The back of her hand swiped across her mouth, a move she knew Mother would abhor, and swallowed the last of the tea in one gulp.

“We have done our best to lead you on the right path. This was your last chance and now it’s time for desperate measures,” Mrs. Squire said.

“I wanted to have a little fun, Mother. All young people like to dance.” The attempt to wiggle out of trouble would prove futile, but she tried anyway. “I’m not interested in the other children, or the fact you value fun over responsible behavior. You are not yet eighteen, and you will not spoil my plans to have you properly married one day with a family of your own.”

Ruth tossed her short black hair and poked out her chin before she spoke. “Marriage? I want to have fun, go places, and see the world. I don’t want to be like you.”

The pop of the slap resounded through the room. Ruth reeled backwards, held her hand to one burning cheek, and blinked in horror.

Though not tall, Priscilla Squire stood strong and broad, a stout woman, in a dark blue, shapeless dress and sensible shoes. Long, streaked, gray hair pulled back into a bun and faded, lackluster brown eyes completed the severe look.

Father sunk lower in the chair and shuddered. Mother rubbed the palm of her hand and strode toward the door…Father slinking after her like a cowed puppy. “Come morning you will have the run of the house, although Sarah’s duties tomorrow include sentry and keeper of the keys. Don’t try to leave, Ruth. We have arrangements to make in the morning. Now sleep.”
The perfunctory remarks stunned her. “Arrangements? What arrangements? Father, what is she talking about?”

The slam of the door and turn of the key sealed her fate. Unless…Can I get a message to my friends, Danny or Ellen? They probably wonder why I didn’t show tonight. Excitement made me careless. I’ll try to call in the morning. Maybe one of them will come and help me escape.